Shiloh School was built by the Julius Rosenwald Foundation between 1914 and 1922 at the urging of Booker T. Washington. It is believed to have been one of the first six schools built by the Foundation. This three-room single-level structure is constructed on a brick pillar foundation and stands 18 feet above the ground. The interior framing is wood stud and the exterior framing is wood. The exterior wall is six-inch lap siding and is the original exterior siding. The ceilings and walls of beaded pine (original) are in good condition in 96% of the building. Cement steps are located on the left and right front side of the building serving as main entrances and are the original steps. A roof of asbestos shingles was added in 1985 to replace the original tin roof that was leaking. The roof is trimmed with 1×6 pine fascia. The building has a gable roofline, and the two main entrances are protected by projecting gable and a shed porch (4×5) with (1×6) wood fascias on the doorway entrances. There are nineteen bays (seven front windows, ten rear windows, and two main entrances). All windows have a 1×4 wood fascia trim. The original heating source was a pot-belly stove in each of the three classrooms; however the chimney area has been closed off (not removed). All doors are the original doors (five and six panel doors) except the two main entrance doors (two panels and six panes). The original two main entrance doors are stored in the building. The hardware (locks, hinges, hooks) are original. The area used as a coal house underneath the building has been enclosed by concrete masonry blocks (1995). The original piers are still in place. The decorative trellis placed along the bottom of the building deteriorated and was replaced with the concrete masonry blocks.

The six windows (3’ 0’’x 3’0’’) on the front side of the building have all been replaced with smaller windows (1996); however, the windows that are in the rear of the structure are larger windows. The rear windows are believed to be the original windows. Each of the rear windows contain nine panes and appear to be in fair condition with several panes missing. All windows are to the east and west of the building maximizing the natural lighting coming into the rooms. Identical entrance ways into the building are located on each front side of the building facing the street. A nook measuring 5′3”X4′4” is at each main entrance on both sides. 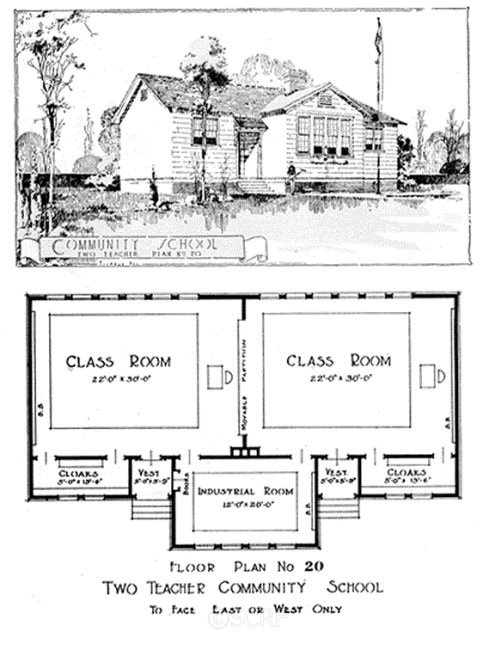 Each entrance way leads to the center Classroom A situated in the middle of theT-structured building. A secondary door (five panels) with transom window allows entry into the one large room that stretches the length of the building. This room is separated by operable folding doors that are 8’0”x18’0’’. When folded, the doors convert a large auditorium type room into two separate Classrooms B and C.

Renovations were made to room Classroom A. A portion of the interior wall covering in this room was replaced with sheetrock because of water damage; however, most of the beaded wall and ceiling is original. There is evidence of moisture/leakage into the room which may have occurred before the roof was repaired. There is one closet and a built-in bookcase situated in this room. The hardware on the doors (two five-panel doors) and cabinets are original. The built-in bookcase can also be accessed from Classroom C located on the right side of the building facing the main highway. Repair work is needed in the ceiling and in some sections of the wall where spacing between the beaded wall is noted. The pine floors throughout the building seem to be in good condition. There are two chalkboards with trays on the walls and appear to be in good condition. This room has a sink (added in 1985). The operable lighting fixtures in this room seem to be original.

Classroom C is separated from Classroom B by a set of operable original folding doors. If entering Classroom C from the main entrance, to the right, is the entrance to Classroom A. There is a secondary door into Classroom C that features a five-panel door with a transom window. To the right on the entrance way, is a built-in book shelf that can be accessed from Classroom A. This room has some evidence of leaking as evident by the ceiling and wall. The leakage to this room was hopefully before the roof was redone. There are two chalkboards with trays in good condition. Two bathrooms are to the left and were added in the area where the cloak room was located. The wall covering in this bathroom is paneling while the floor is linoleum There is a battery of five of the ten windows on the rear side of the structure with several panes missing. The covering on the wall and ceiling is the original beaded pine. The floor covering is pine located throughout the structure. The operable lighting fixtures in this room are original.

The school sits on approximately two acres of land (Latitude 323138N and Longitude 0854040W). The original landscape consisted of a wall of hedges outlining the yards and two large cedar trees to the right and left of the entryway to the school grounds. There were also daffodils in various areas in the edges of the yards (no beds). There has been some soil erosion from wind and rain. A large swing was situated in the rear of the building (playground). An unused well for drinking water sits to the right of the building. The outside “privies” have been torn down and trees are growing where they were once located. The original “privies” consisted of two units. One unit was for girls and one for boys. Each unit consisted of a wall for privacy and three separate stalls located approximately 500 feet from the rear of the building.